On March 27, 2006 while attending a meeting of the Kansas City Woodcarving Club in Prairie Village, Kansas, I met Jerry Reinhardt. Jerry told me that I should come up to Leavenworth and visit the C. W. Parker Carousel Museum to see if I would like to do some carving for them. Jerry is the museum director. I told Jerry that it sounded interesting and that I would try to get up there as soon as I could. It hadn’t been long since I had retired from my career of 34 years so I had some extra time on my hands. 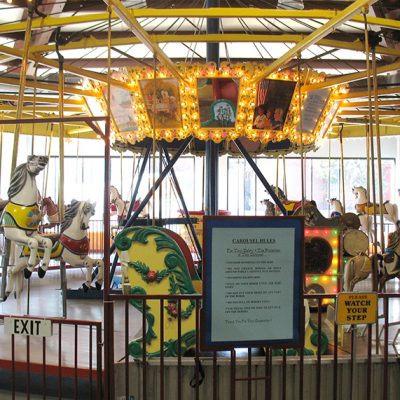 I visited the carousel museum for the first time on April 3rd, their scheduled work day which occurs every Monday. This is the day that the all volunteer carousel crew gets together and does maintenance, including repairs, lubrication, and general straightening up and cleaning. The museum was quite new. I learned that the building had been recently constructed and had only been open for about a year. Jerry gave me a tour of the museum. I had never really been interested in carousels mainly because I had not been exposed to them and didn’t know much about them.

I found the tour and the museum quite interesting. Here was another area of carving that I had never explored. Through Jerry’s tour I learned that there was a lot of history associated with carousels and with the carving of carousel animals. It looked like the museum was a good place to learn more about it. They had lots of carousel horses on display, some restored perfectly and others that were in line and scheduled for much needed restoration. 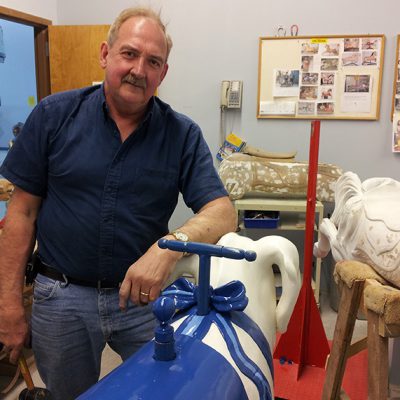 I won’t go into all the history of the C. W. Parker carousel or the museum because the museum has a very fine web site here. You can go there and find out all you want to know about it. The museum has 3 operating carousels, a 1913 Parker Carry-us-all #118 and a 1950s vintage portable carousel, which are both operating and can be ridden. The third carousel is a hand cranked Primitive Flying Horse Carousel built in Maryland in the mid-1800’s. It is owned by the National Carousel Association and is on loan to the museum.

I decided that I would start volunteering as a woodcarver at the museum at least one day a week when possible. Jerry had a specific project in mind for me. Way back in 1997 an article had appeared in the National Carousel Associations Magazine. There was a photograph in the article of one of Parkers fanciest and most decorative park carousels. Below that photograph was another of one of those same type carousels but it was in pieces arranged over a field in Canada. The carousel had been disassembled and was being auctioned off piece by piece to the highest bidder. The photograph featured a stack of rounding boards. Each had a piece of paper with a number attached to it, obviously so that each piece could be identified in the auction.

Carousel rounding boards sit at the top of carousels and form a complete circle, serving a dual purpose of hiding the machinery at the top as well as creating a flashy appearance usually with lights to attract riders. Above the rounding boards there would be a tent like affair which was usually brightly colored in red, white and blue. Since the panels have to curve or be rounded to follow the circumference of the carousel, thus the name rounding board. 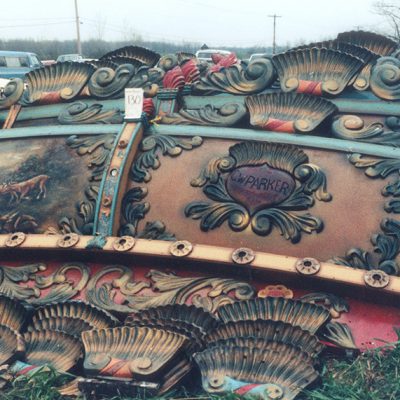 Jerry had imagined reproducing a few of these fancy carousel rounding boards and mounting it in the foyer or entry area of the museum. This would be the first thing that a person entering the museum would see, complete with lights. Jerry had contacted the National Carousel Association all those years ago and had obtained a good copy of the picture that had appeared in the magazine. He showed me this photograph and asked me if I thought I could carve it. I thought, “Man, is he really thinking big!” I told him that I had never done that type of carving before but that I believed I could do it.

So I studied the photograph trying to figure out how those carvers almost a hundred years ago went about carving the pieces.

Fortunately, my son Troy Lawrence who lives is Greensboro, North Carolina is a graphic artist. I called Troy and asked him of he could use his artistic and graphic abilities to see if he could digitally straighten and square up the items in the photograph so that accurate outline drawings could be made of the individual carvings. This would also be needed to help with the design of the framework and paintings. I scanned and emailed the pictures to Troy. He was glad to help and got started right away. I know it took a lot of work and study on his part just to come up with some good outline drawing which he did. 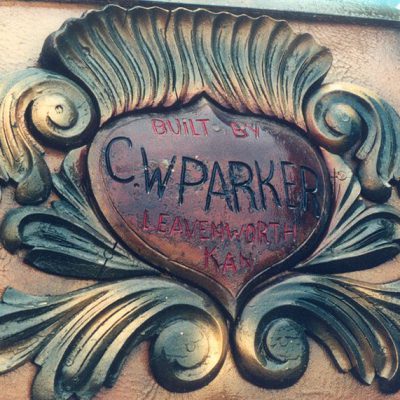 I was able to take those drawings, which Troy scaled to the exact size I needed and make patterns from which to get something going. I went to work laying out the patterns and gluing-up basswood boards to get large enough pieces from which to cut the blanks for the carvings. This required a lot of glue. I did most of the glue-up at the museum. I brought the rough glued-up blanks home and sawed out the rough shapes of each of the 50 individual carvings.

I started on the project in April of 2006. It was a long process taking almost exactly a year and a half to complete. As I carved the pieces I thought a lot about the carvers of Leavenworth, who in days gone by had probably went through the same processes as I did to build hundreds of beautiful complete carousels. I finished the project on September 14th of 2007 and it was mounted on the wall in the museum on September 17th.

I tried to get out to the museum every Monday and I worked an average of about 6 hours each day I went out. Sometimes I got really involved and couldn’t wait until the next Monday so I would go up an extra day or two on some weeks. I put 77 days into the job for a total of 430 hours. This does not include the time others worked on it. Those who helped are listed further down.

While spending all that time carving I had plenty of time to devise a design for the framework which would allow the assembly to be mounted easily and safely without putting any undue strain on anyone participating in the installation. I assembled and disassembled it several times to make sure the carousel rounding boards and the framework fit together smoothly, fine tuning the fit-up as necessary.

In this photo you can see the outline drawing of the center panel that was produced by Troy. 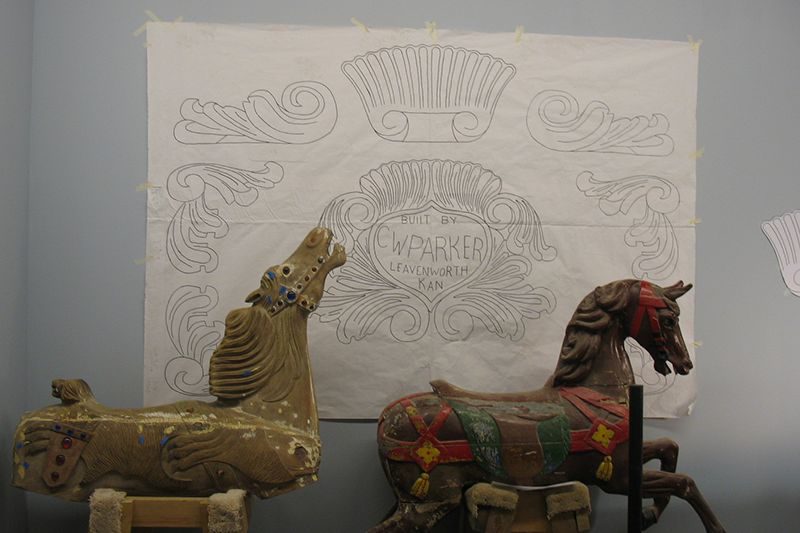 Here I am holding the first completed carving of the project. Only forty nine more carvings to go! 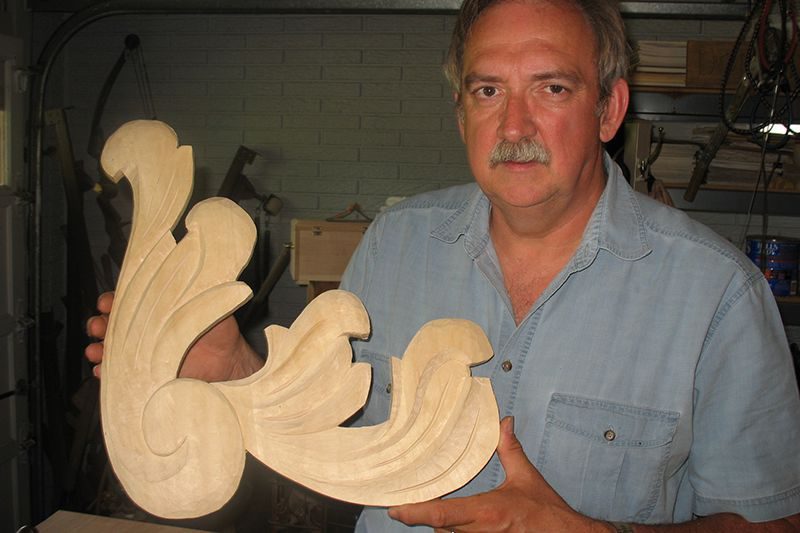 Here I am holding several of the completed corner carvings. I would need to carve a total of twelve of these. 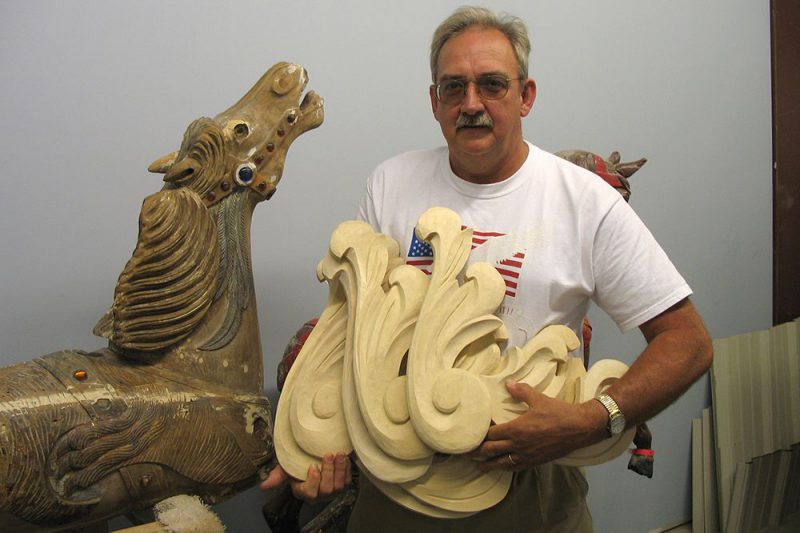 I noted the date when I completed the last of the twelve acanthus carvings. The date was September 18, 2006. One year later we would complete the entire project. 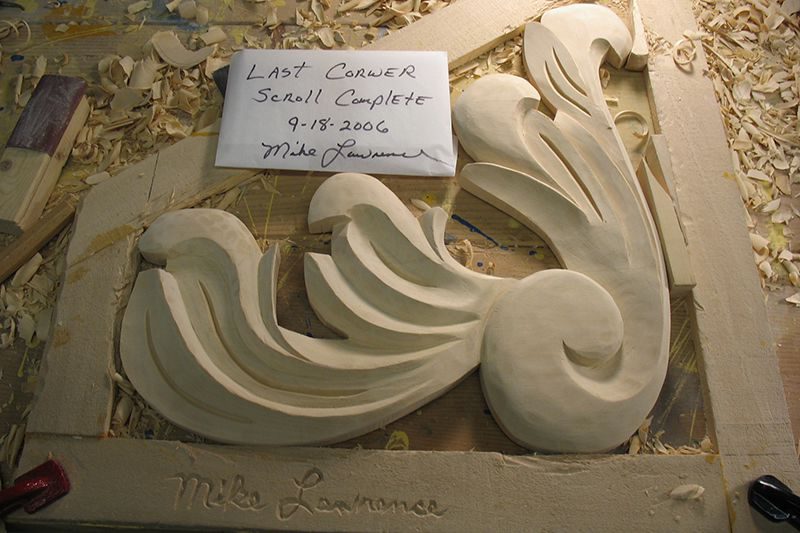 In this is a photo you can see two or the acanthus carvings that will sit on each side of the shell carving on top of the rounding board. I’ll need six of these. 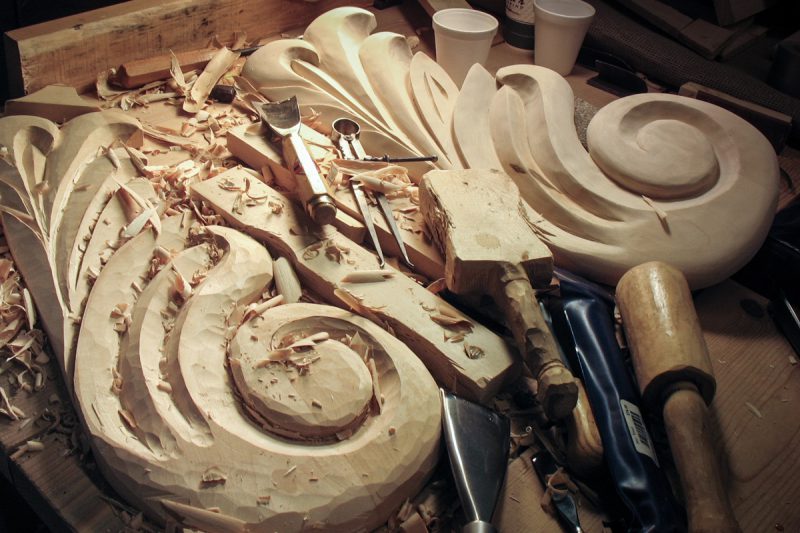 Here I am getting started on one of the large shell carvings that attach to the top of the carousel rounding boards. I’ll need three of these. 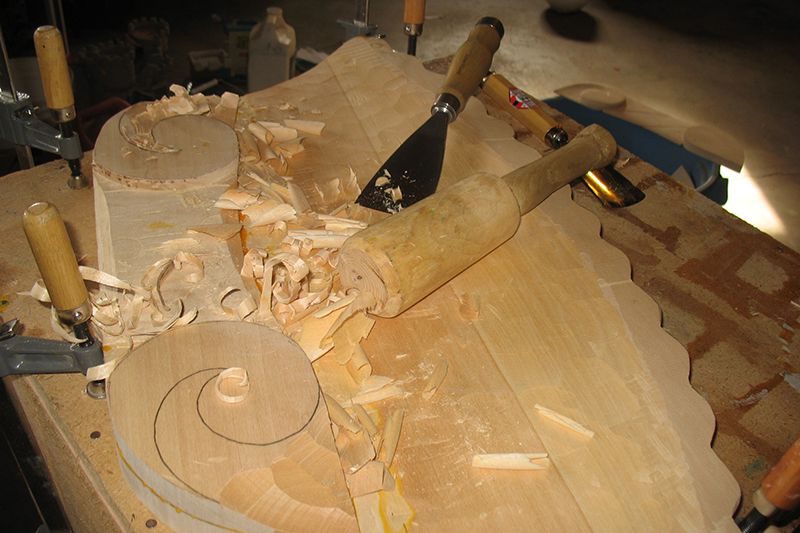 Here I am carving one of the torch flames that will sit on top of the posts that separate each of the panels. Four of these will be needed. 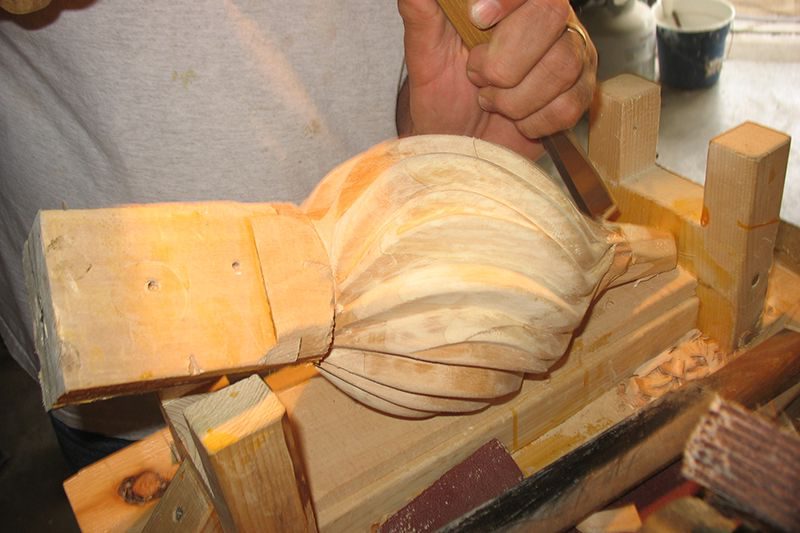 Here is a torch in the very early stages, glued-up and clamped. You can also see here two others torches that I have turned in my lathe. 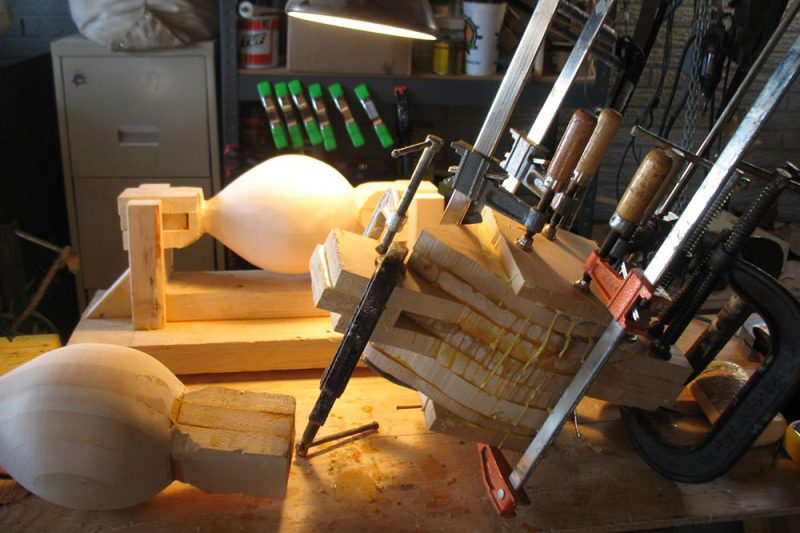 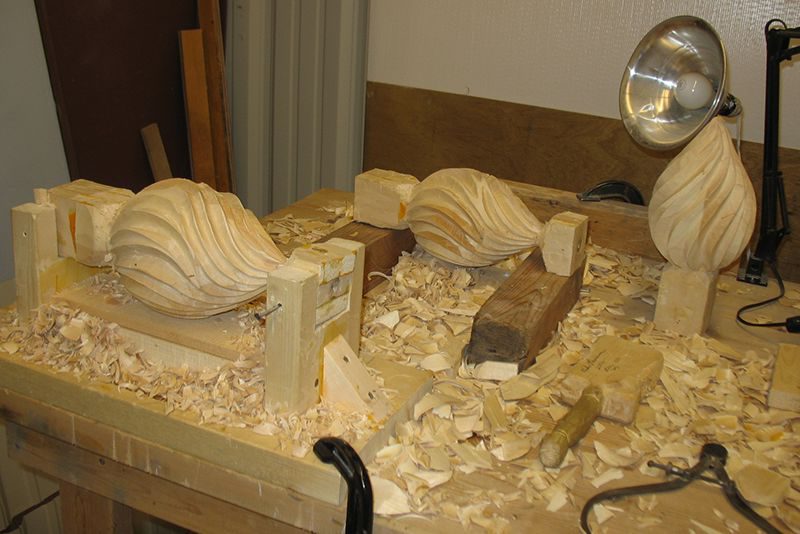 Here I am using a hand saw to make some final adjustments to the base of a torch to allow it to fit in the top of the post. 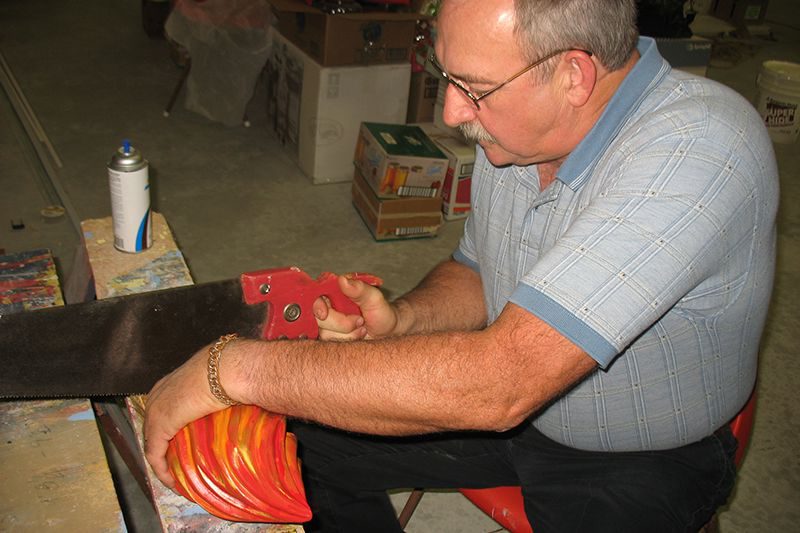 This torch has been fitted into the top of the post. The painting of this torch and all other carvings were done by Jerry Reinhardt. 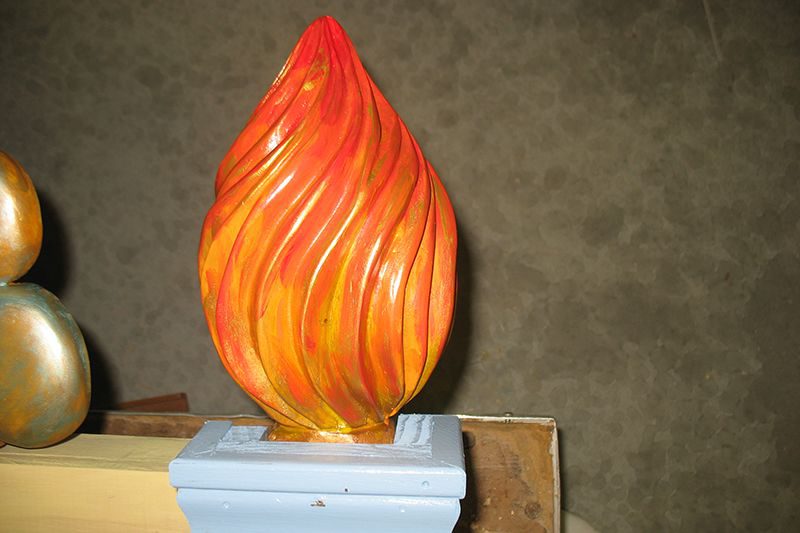 This is the carving of the shield that will be placed at the very center of the middle panel. On it I will carve the words, “Buit by, C. W. Parker, Leavenworth, Kan. 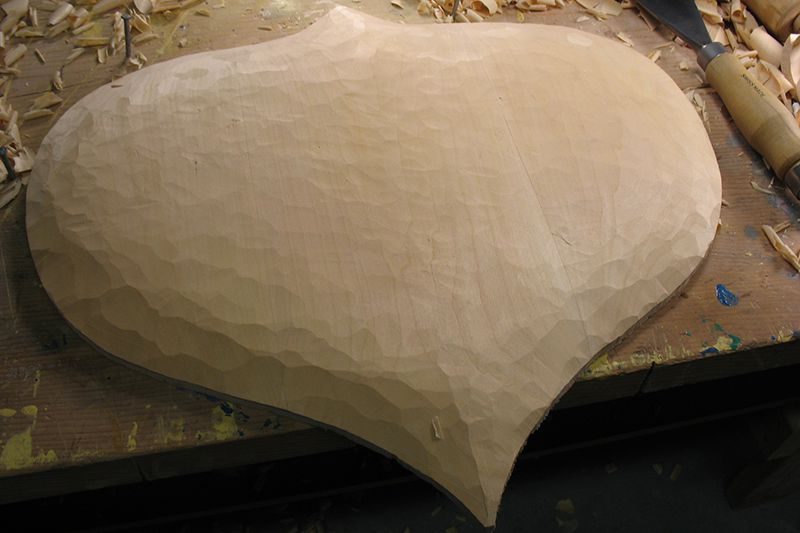