See how all the individual carvings and other elements come together to form the carousel rounding boards display. If you have not read Carousel Rounding Boards Part 1, you may want to do so before continuing with part 2.

Putting it all together

Here is the C. W. Parker shield and associated carvings that will be attached to the center of the middle panel of the carousel rounding boards. We temporarily placed the carvings on the panels to test the fit within the panel and framework. While this stage of work is being done, the murals are being painted by Mary Ellen Walker, Norma Graham and Jo Ann Hendricks. 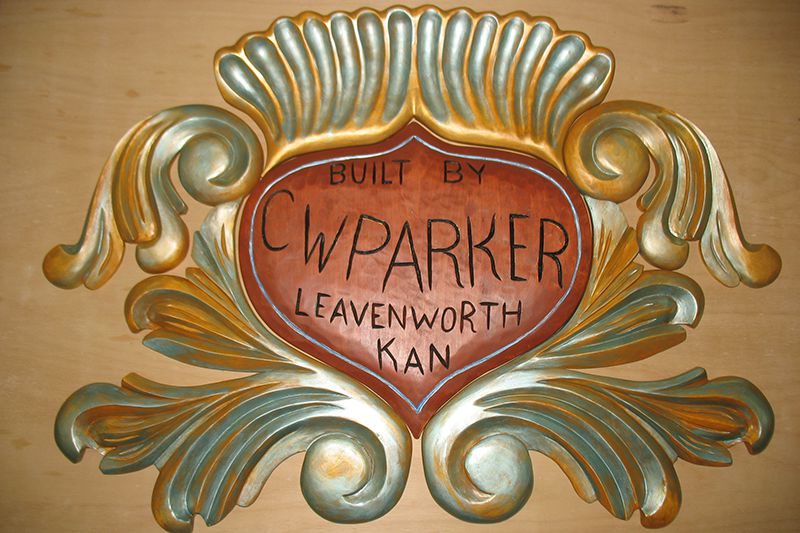 Here I’m touching up the framework for the rounding boards. Note the light socket bases were also carved to replicate the old style bases that are no longer available. 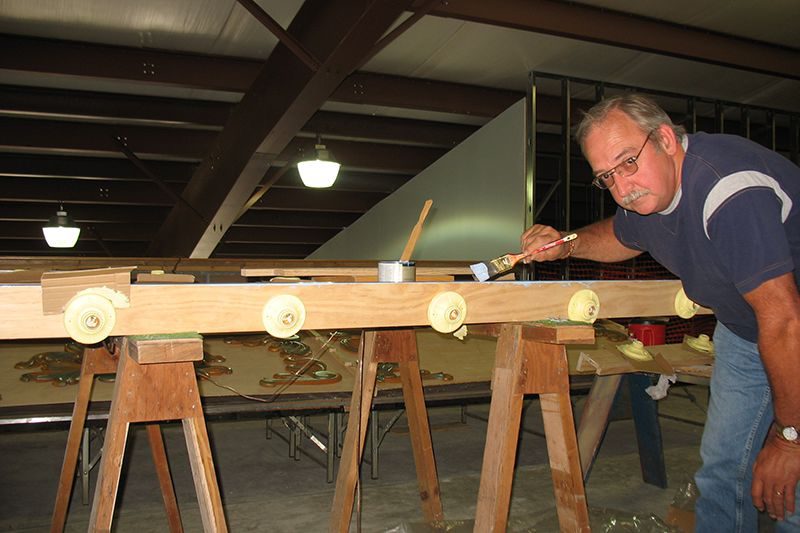 This is the carousel rounding boards framework with light sockets and bases attached. At this point the socket bases have been painted. 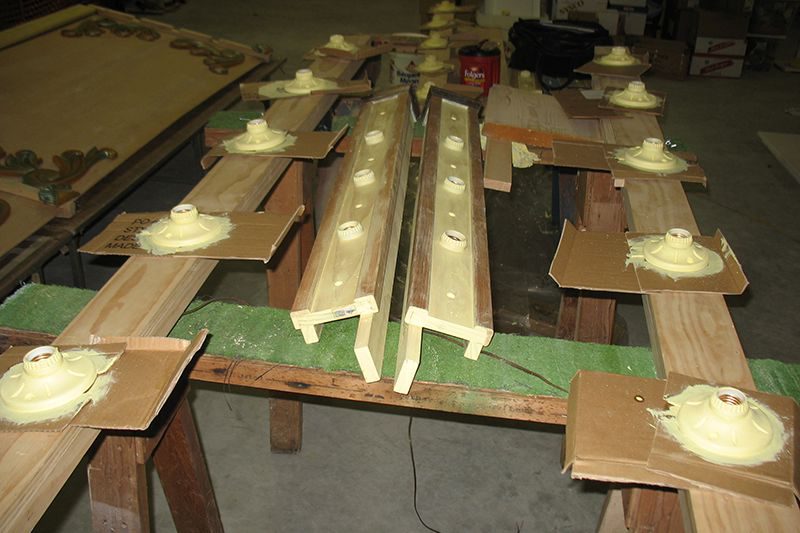 In this photo you can see that I have attached the large carvings to the top frame and am about to attach it to the rounding board. This is part of another test assembly to assure that everything goes together as it should before actually mounting it on the wall. Better to find problems now than when you are 16 feet off the ground! 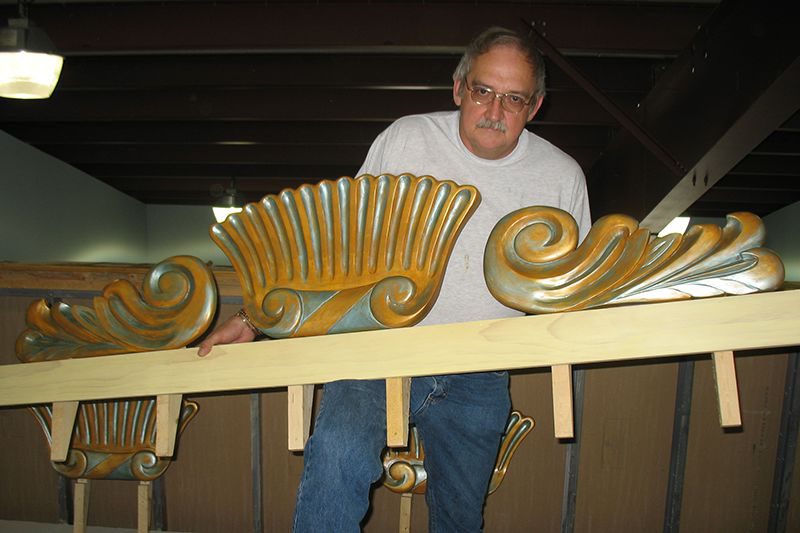 The top frame is attached and everything fits as it should. Now I just need to add the torches to the top of each of the four posts and the leaf carvings to the base of the frame. Jerry Reinhardt is in the process of painting the torches which will be the last pieces to be painted. 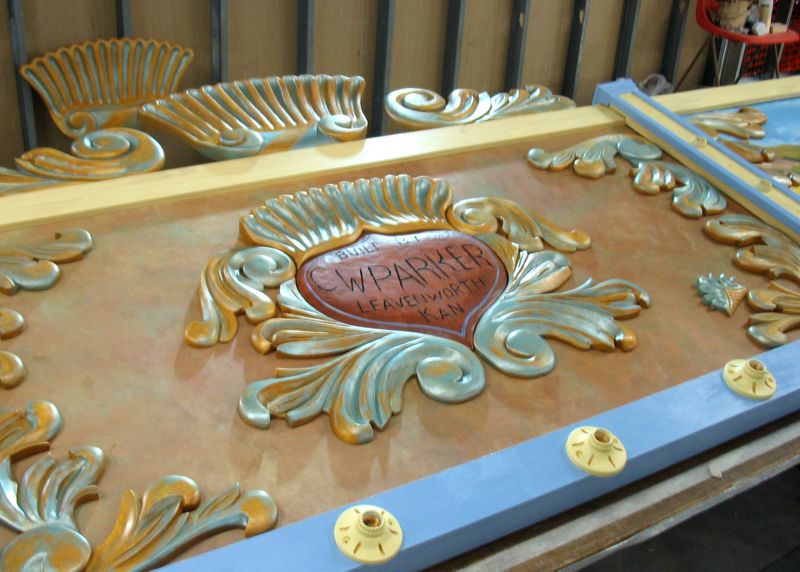 Here I’m just taking a little rest and thinking that the job is almost complete. I later disassembled everything one last time. The next time it all goes together will be when it’s mounted on the wall in the museum. 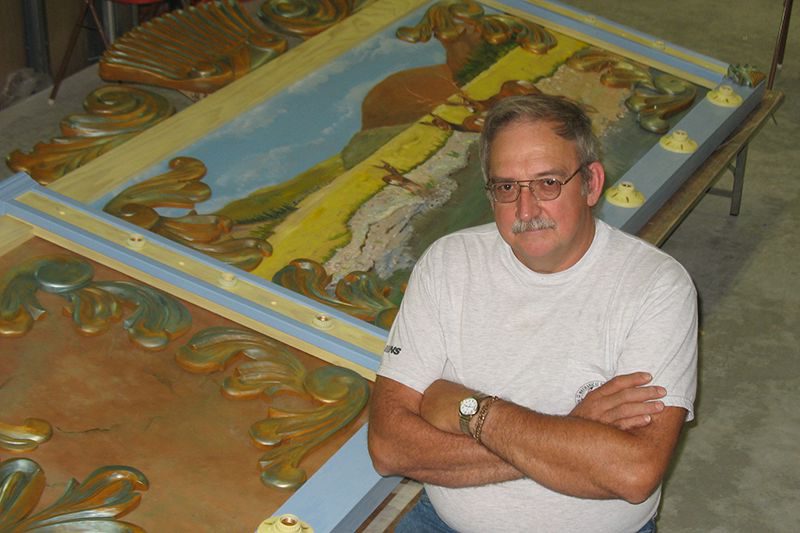 Ok, it’s September 17th, 2007 and here we go! The framework is mounted on the wall. Up top is Walt Defrees and Harry Mohan. 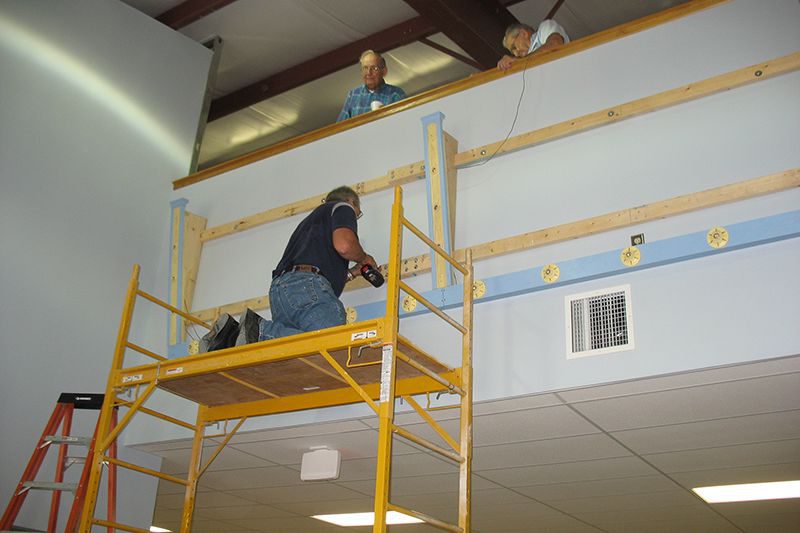 Here we are installing the first panel. Its the left most panel with the buffalo. Walt is on the scaffold with me and up top from left to right are Harry Mohan, Dale Roller, Tony Baker, Louie Klemp and Larry Baker. 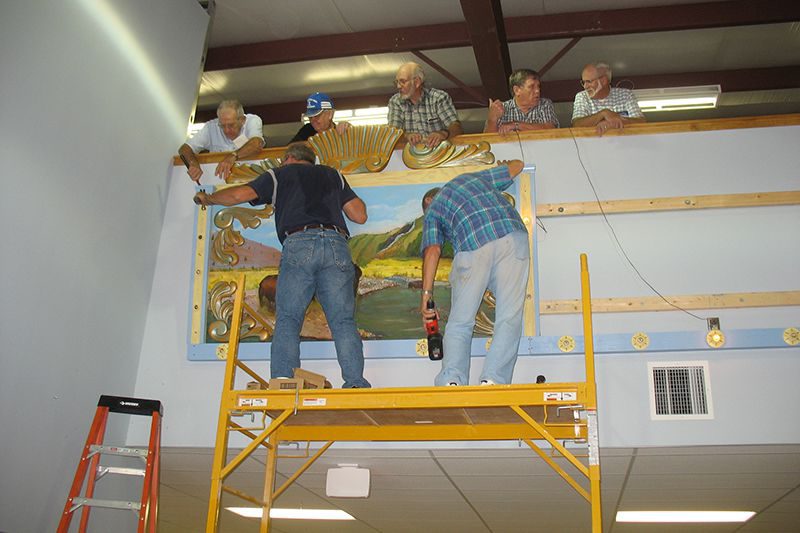 Here we are lowing the center panel into place, and fits like a glove. Notice that the torch on the far left side has also been attached. Next we’ll be moving the scaffolding over in preparation to install the last panel. Everything is going well so far! 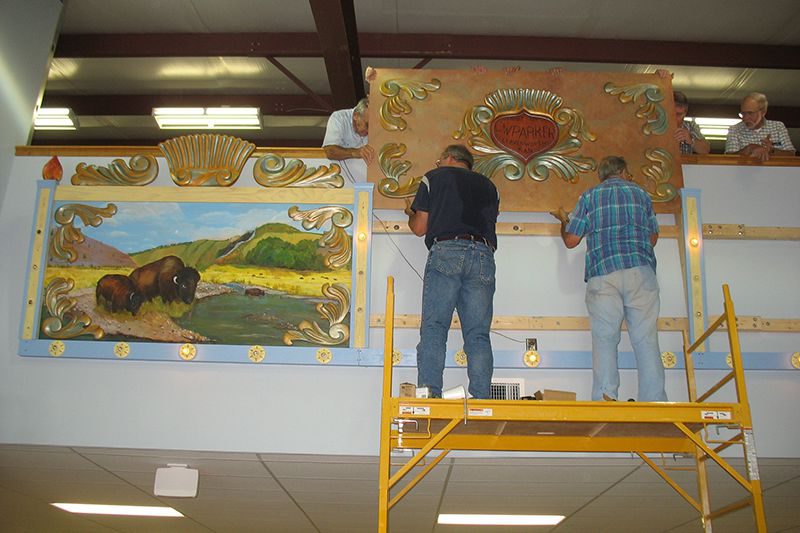 And now the final panel is in place. Getting close to being finished! 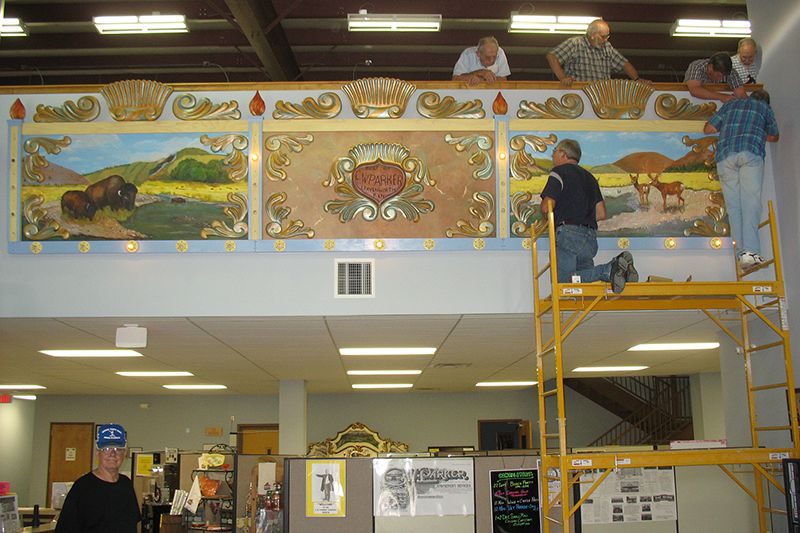 All the panels are up now and everyone seemed to be pleased with how everything looked. Lights are on. Here’s a view of everything with the scaffold down and everyone out of the way. 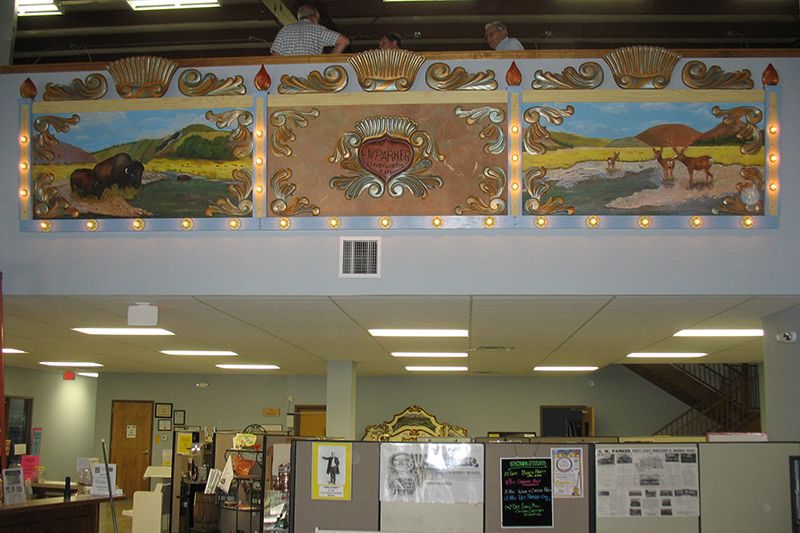 Here’s a closer look at the buffalo panel. 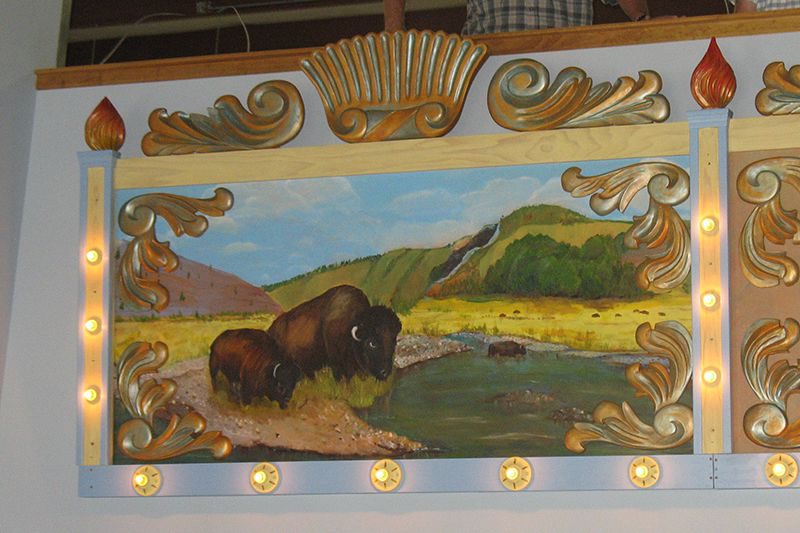 Here’s the center panel with the C. W. Parker shield. 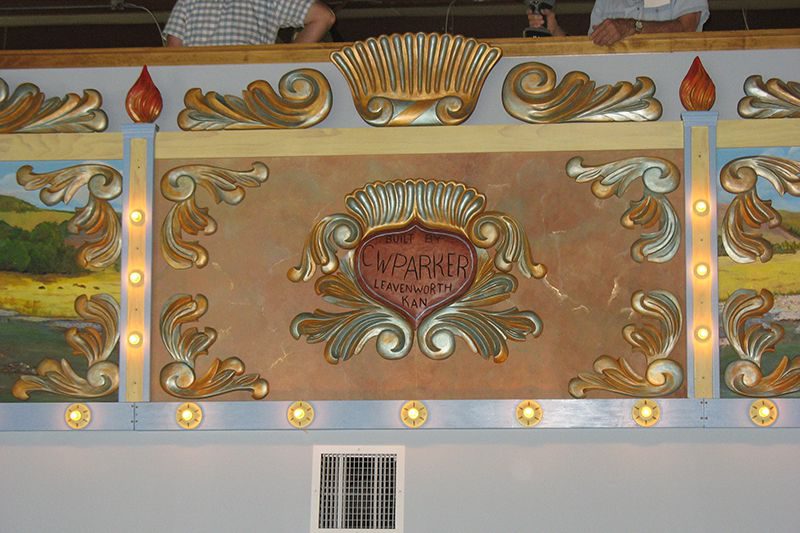 And here’s a close-up of the deer panel on the right. 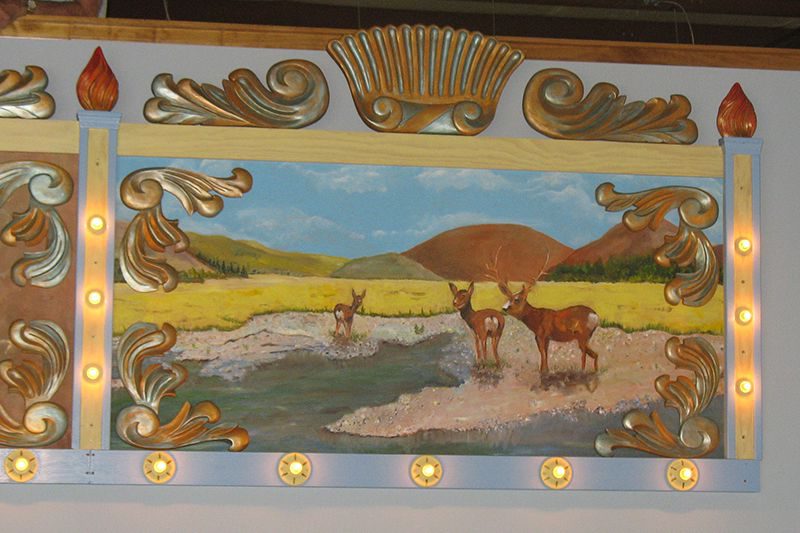 We gathered on September 28th at 10:00 a.m. at the Carousel Museum for the unveiling ceremony, which many of the museum volunteers, city and civic leaders, The Kansas City Star, The Leavenworth Times and other interested parties attended. We are all watching as the vail is removed from the carousel rounding boards and the public sees the project for the first time. 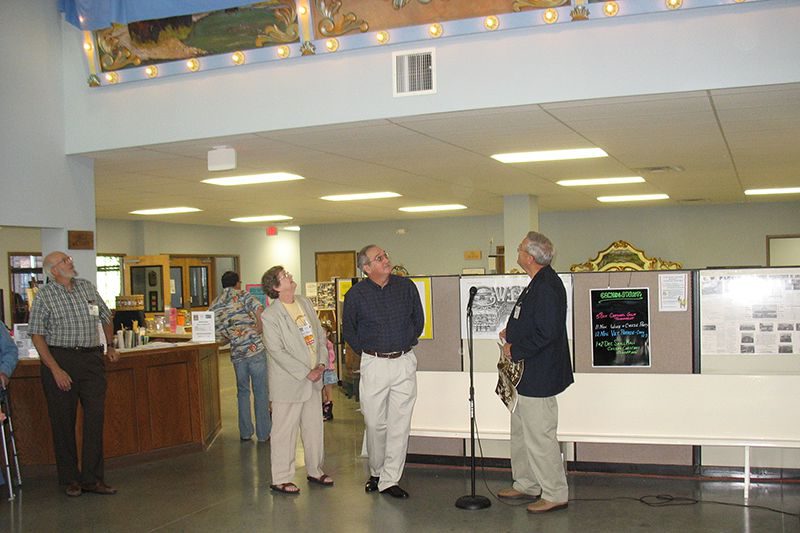 Jerry Reinhardt is at the microphone telling how he got the idea for the project. 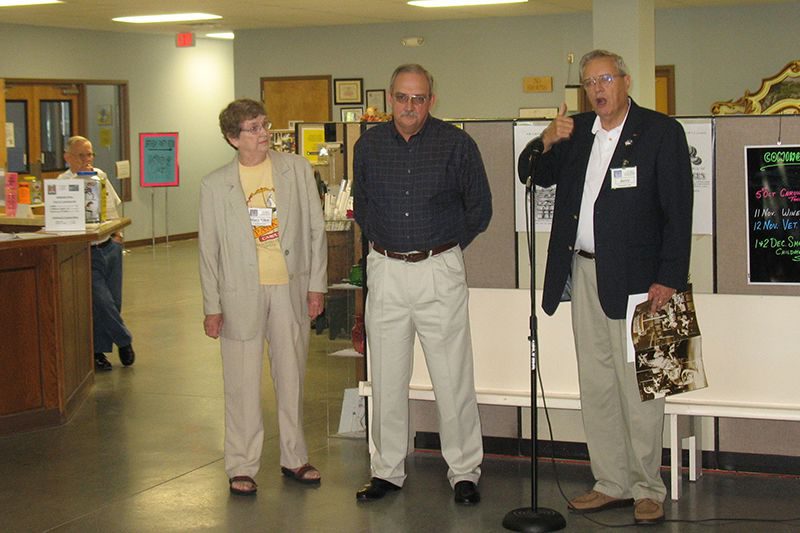 Jerry asked me to say a few words, so I did. 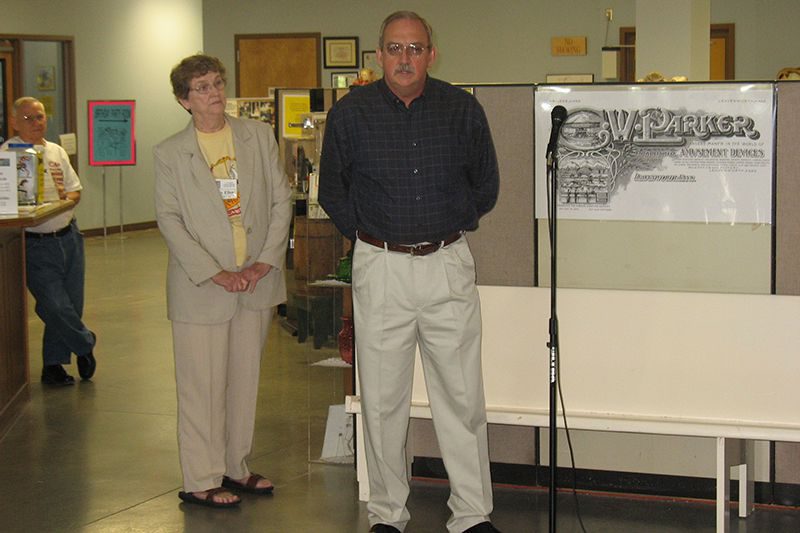 Mary Ellen Walker, one of the three ladies who did the painting of the murals also spoke. Jerry then thanked everyone for their work and closed by saying, “Have a merry-go-round day”! Cake and refreshments were served. It was a nice ceremony which I enjoyed and appreciated. 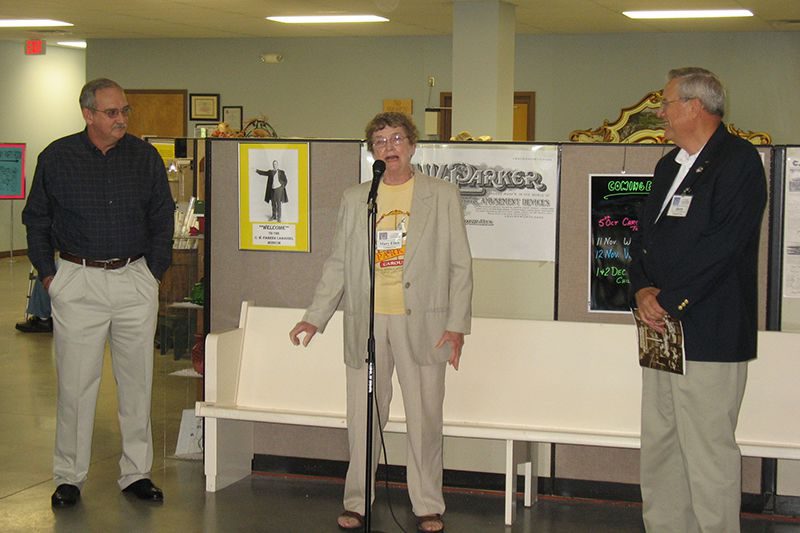 I went back up top to pose for a few pictures. It was a long process, but now it’s all finished! 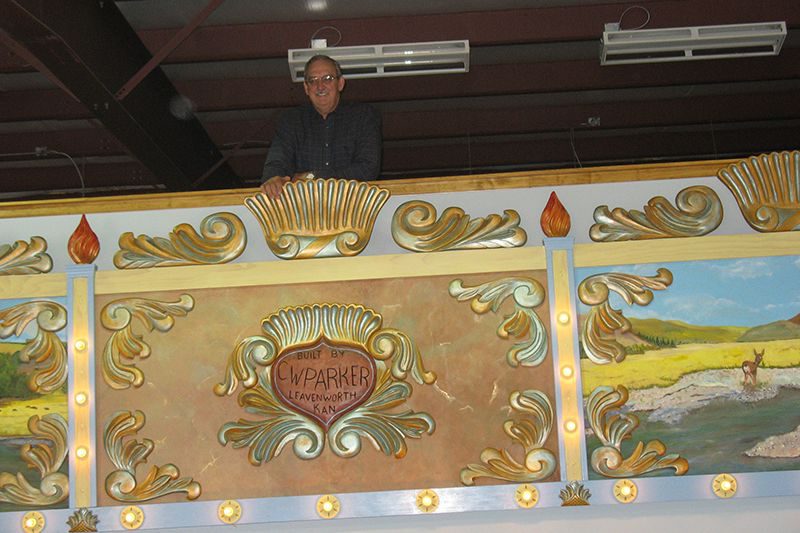 With a project of this size, help must be had if it is to be a success. I want to give credit to everyone who helped me in any way with the project. Here is a list of those who worked on the project. I thank you all very much for your help and support. 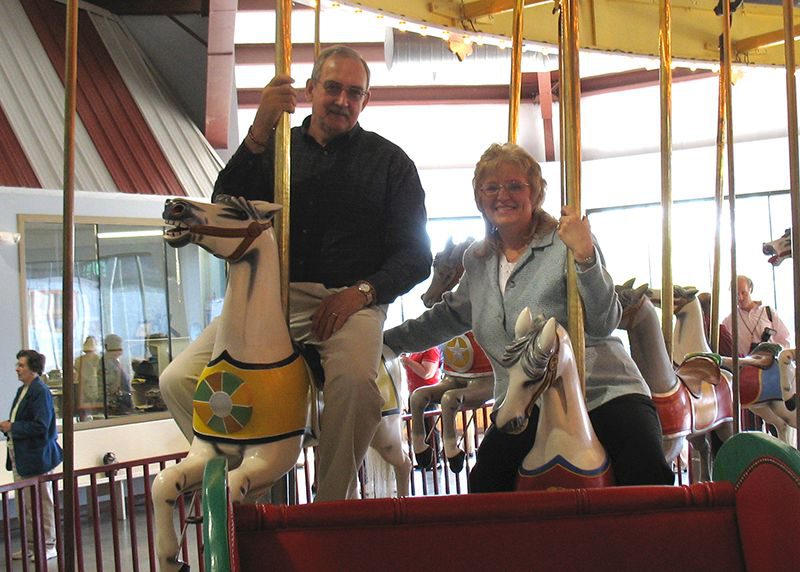